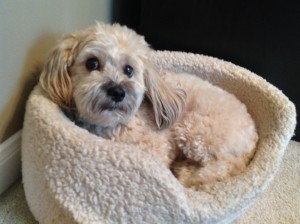 Our dog Snickers is an integral part of our home.   He gets unconditional love and lots of interaction from the entire family.   A few months ago, the groomer we take him to announced that the dog had become pretty difficult to work with and that we’d have to sedate him before any future appointments.   That was hard to accept because she did a fantastic job bathing and cutting him.

I tried to convince myself that if I had done a better job combing the dog out between visits, this wouldn’t have happened.   But since there was nothing I could really do about it now, I decided that I would start combing him out more and learn to groom him myself.

I’d have to say besides the time to find good videos on YouTube, I spent a fair amount of time looking for equipment.  We already had a Wohl brand set of clippers, but I wanted to find a sharpener or replacement blades.   You can find cheap cutting kits at Walmart for under $50 which have instruction videos and attachments.   The higher end clippers with interchangeable blades are in the $100-$200 range.   You’ve got choices on corded or cordless as well.    I also learned a lot about how the pros use hand clippers and it’s amazing to watch how fast they can work with them.    Prices vary — the top of the line clippers can cost over $1000 (whoa) and the length and curvature of the blades is a factor.   You can also buy thinning sheers which are great for making short cuts around their face.   For now, I settled on a pair of 6″ clippers from PetSmart for $19.

I think the next big hurdle was getting up the nerve to cut the dog.   I was worried about him looking bad afterwards and then having to go to the groomer for help.   I stalled in the ‘making sure the dog was brushed out’ stage for a few weeks for finally bathing the dog and cutting him.   His first cut was ok — the clippers were a little dull but he came out looking a little on the roly/poly side because I didn’t know where on his coat to cut shorter or longer.

A few months later, I gave him his second cut which turned out a lot better.  The second time to do anything is usually a lot easier and it was.   I experimented with a shorter cut on on his waistline, chest and around his ears and this made a huge difference (no more roly/poly look).  I also learned to work on his sensitive areas first to avoid exposing his skin to a hot razor blade and the early reading payed off when I accidentally nicked him.   I used some natural honey as a safe savve for him.

The picture above is after his recent cut.  I still need to comb out and cut his legs but for now he looks good and I saved the normal $50 groomer fee.