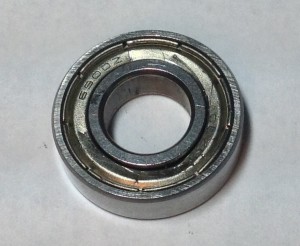 Ready to give up?   It’s an axle bearing from our recumbent exercise bicycle that causes it to rattle when I ride it — enough to make me think I was tearing up the bike.   If you look closely at the photo (you can click on it for a larger version), you’ll see a pretty good scratch that starts at about 1 o’clock and goes all the way around until just shy of 3 o’clock.   Either this baby was hammered in wrong at the factory or something got caught in in later to cause the damage.   Just that little scratch/dent causes the ball bearings to stick during the rotation and that causes the flywheel assembly to rattle as it picks up speed. END_OF_DOCUMENT_TOKEN_TO_BE_REPLACED 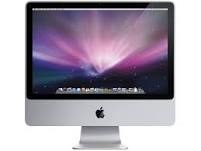 Earlier this year, the four year old 24″ iMac in my office starting getting horizontal lines on the display.  It started with one line near the bottom of the screen, worsened with another line appearing and then expanded to the entire screen having problems with wide horizontal bands.

Google searches led me to believe it was the GPU (Graphics Processing Unit) overheating due to the internal fans not running fast enough.   Apparently Apple had chosen to set the fans speeds lower to make the unit run quieter at the risk of damaging hardware due to overheating. END_OF_DOCUMENT_TOKEN_TO_BE_REPLACED A couple of weeks ago, my wife mentioned that her Bose SoundDock wasn’t working.   Of course I thought it was probably something minor.   The SoundDock is a high quality unit that you dock your iPod or iPhone to get great stereo sound.  I had purchased it for my wife 6-7 years ago and it had always been a strong performer.

I first tried my iPhone (because we’ve been having problems with her phone) and it didn’t work.   I noticed the connector was a little loose, but it didn’t seem loose enough to cause a problem.   So I google’d for information on the unit and found out that my situation isn’t uncommon.    I found a UK based company called Invebo that had information on how to determine the failing component and three replacement options. END_OF_DOCUMENT_TOKEN_TO_BE_REPLACED